'Co. Aytch,' Maury Grays, First Tennessee Regiment or, A Side Show of the Big Show 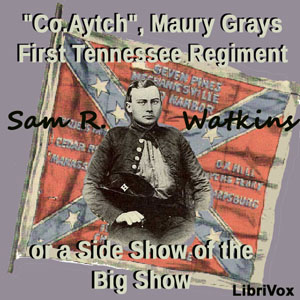 'Co. Aytch,' Maury Grays, First Tennessee Regiment or, A Side Show of the Big Show

Samuel “Sam” Rush Watkins (June 26, 1839 – July 20, 1901) was a noted Confederate soldier during the American Civil War. He is known today for his memoir Company Aytch: Or, a Side Show of the Big Show, often heralded as one of the best primary sources about the common soldier's Civil War experience....Sam’s writing style is quite engaging and skillfully captures the pride, misery, glory, and horror experienced by the common foot soldier. Watkins is often featured and quoted in Ken Burns’ 1990 documentary titled The Civil War. (Introduction from Wikipedia)

Winston Tharp's reading is superb, one of Librivox' best, perfect.